The behavior of the Gorongosa elephants is strongly influenced by their fear of people, which was shaped by their experiences during Mozambique's civil conflict. Apprehension also has an impact on their use of habitat. The Gorongosa elephants are careful to avoid open areas during daylight, and they tend not to visit places where they feel vulnerable until nightfall. They avoid coming out of the forest onto the Urema floodplain until very late afternoon, and move rapidly away from vehicles if caught in the open. 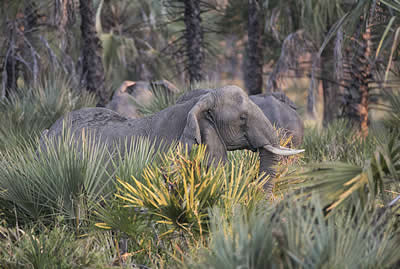 In populations where elephants feel safe, they prefer to visit rivers and waterholes during the heat of the day. But, the images coming in from our motion triggered cameras show us that Gorongosa's elephants almost never come to the Pungue River during daylight and, even at night, they approach the river bank with caution. They sniff around and listen before descending the bank; and easily become frightened, running back up and into the forest, with their tails in the air.

Gorongosa is an elephant's Eden 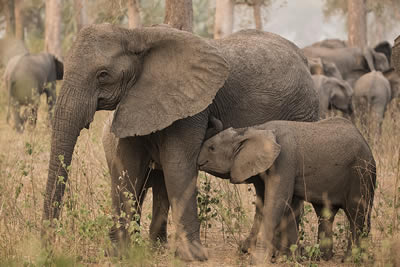 Gorongosa National Park encompasses 4,000 km2, with close to 7,000 documented species of animals and plants. Elephants are currently using only a small portion of it. Their absence from large swaths of the park has ecological consequences that affect the distribution of other species, too. As long as fear persists as a response to people, it will be a deterrent to their expansion, all other factors remaining equal.

Another indication of their good nutrition is that mother elephants have unusually large breasts and are producing plenty of milk. We often see mothers  suckling two calves simultaneously (which is unusual in other populations), including calves belonging to other females (also unusual).

The elephants’ critical roles in ecosystem functioning will only be possible with knowledge of elephant behaviour, ecology and dynamics related to human-elephant conflict, which is being studied by the ongoing Elephant Ecology Project headed by Dominique Gonçalves.

Based on our current knowledge (end 2019), the Gorongosa elephant population is made up of about 28 families living in two clans we have named the Urema and Pungue Clans. In addition there are some 168 independent adult males. Our data show some Gorongosa families to be very cohesive, while others appear much less so, joining and splitting along irregular lines. Likewise, we see variation in how gregarious families are. We postulate that the lack of cohesion we observe may be related to the massive poaching that took place during the civil war between1977 and1992, which left many families highly fragmented, lacking leaders and older females.

A culture of fear and aggression 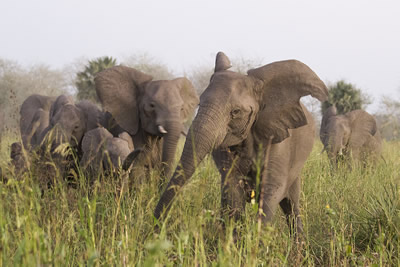 Gorongosa's elephant survivors haven't forgotten their gruesome experiences in Mozambique's civil war and, two decades later, they are still wary of people. When they do meet people they are likely to take defensive action - either fleeing or attacking. They regularly threaten, charge and chase vehicles and, on several occasions, have physically attacked and damaged them.

While only those elephants over 25 years old would have memories of the war, young elephants learn how to behave in the context of their mothers and other family members. And mother elephants are good teachers! Aggression is so pervasive across families that we have coined the term “a culture of aggression” to describe the behavior that we have observed. How such behavior correlates with family or clan membership, and how it affects the integrity of elephant society and its

ability to recover from a period of poaching, is of special interest to us as scientists and conservationists. In recent years heavy poaching for ivory has destroyed the fabric of elephant societies across the continent of Africa. Whether and how these populations recover is of great concern.

From the park's perspective there are other issues, too. One of the aims of the Gorongosa Project is to build tourism revenue and aggressive elephants are a cause for concern. Furthermore, elephants play an important role in shaping habitat, and the lack of elephants across much of the national park has consequences for other species and ecosystem processes.

Understanding and respecting the signals of elephants

We know that elephants are adaptable and can learn quickly. How rapidly will they learn that the park is safe again, and that tourists, at least, don't represent a threat? How will they adapt their behavior and who will do so first? What we discover may hold clues to how long it will take them to recolonize Gorongosa and how other elephant populations will recover from more recent waves of poaching.

As we go about our work in Gorongosa, we keep detailed records of how different families respond to us and whether and how their reaction changes over time. We approach elephants slowly and cautiously and turn off the car engine at the first sign of apprehension or aggression from them. By doing so we aim to show them that we understand and respect their signals, that we mean them no harm. If they charge we stay still, showing them that we are not afraid of their bravado. Using this approach we are doing a bit of teaching ourselves, and we are beginning to see results. Some of the families that we have met on many occasions are learning that we don't represent a threat. For example, the notorious Mabenzi family, infamous for their aggressive Group-Charges has begun to approach us in curiosity and have stayed calmly, within a few meters of us, for half an hour. One Tusk, a legendary lone-charging matriarch, has also surprised us with her relatively calm demeanour.

Female elephants are the quintessential drama queens; they revel in making a big deal about almost anything. And they display some of the most dramatic and terrifying defensive behavior. Much of it is bravado, but elephants are perfectly capable of forcing an issue. Our approach is not for the inexperienced nor for the faint-hearted, and we are extremely careful around those we don't know. 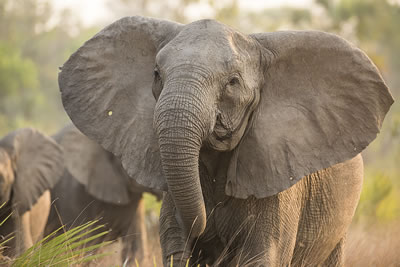 "Naughty behavior" and families lacking cohesion are not the only scars that poaching left on these elephants; there are indelible physical marks, too.For example, quite a number of elephants have holes in their ears that we believe were caused by bullets that missed their mark.

Furthermore, among elephants over 25 years old the population is very skewed toward females, due to the fact that male elephants have much larger tusks and are, therefore, preferentially killed by poachers. Most obvious, though, is the high proportion of tuskless elephants.

A few facts are neccessary to understand the occurrence of tusklessness in elephant populations that have experienced poaching. 1. Tusks continue to grow throughout most of an elephant's life, so that older elephants have larger tusks; 2. Tusks are a sexually dimporphic trait; the tusks of males weigh up to seven times those of females of the same age. 3. Tusklessness is a naturally occurring trait, and in populations that have suffered low levels of killing for ivory, or killing that many decades earlier, tusklessness occurs in about 2-4% of the female population. 4. Tusklessness is extremely rare among males because males need their tusks to fight for access to females; a tuskless male has a much lower chance of mating and passing on his genes than a tusked male of equal size and strength. Therefore, through the course of evolution, there has been strong selection for tusks in males. 5. Tusk shape, size and configuration, including tusklessness, is inherited.

Since poachers select elephants with large tusks, they preferentially target males first and then older females. As killing persists poachers kill any elephant with tusks. The result is that tuskless elephants have a higher chance of survival than those with tusks and, therefore, the proportion of tusklessness in the population increases. A high proportion of tusklessness is a signature of a population that has been heavily poached. Since about half the female offspring of tuskless mothers are tuskless, the trait persists in a population for many, many years, although over generation the proportion will gradually decrease. In Gorongosa there are no tuskless males, but 50% of the females who were adult during the war are tuskless, and 32% of adult females born since the war (age 15-25) are tuskless.

The short film below is one of the outputs of a collaboration between ElephantVoices and Howard Hughes Medical Institute, in which Joyce talks about tusklessness among elephants in general and some of our related findings in Gorongosa. This film, with footage from Gorongosa, is part of HHMI's Elephant Portal - and ElephantVoices efforts within educational outreach.

If you want to learn more about Gorongosa and meet some of our big grey friends, watch the 2015 award-winning 6-part documentary series  "Gorongosa Park: Rebirth of Paradise". The series premiered in the United States between September 22 and October 6 2015.
You can watch the entire series via PBS LearningMedia. In Episode 2 (Elephant Whisperer) and episode 5 (Battle Lines) you get glimps into the early work of ElephantVoices in Gorongosa. The series was aired on PBS and National Geographic Wild.