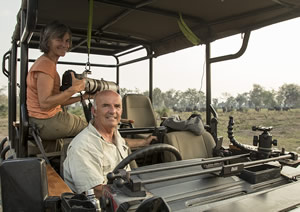 Back in 1969 Gorongosa National Park was home to over 2200 elephants. Between 1977 and 1992 civil conflict in the country took the lives of most of these individuals. Elephant meat was used to feed soldiers and ivory was sold for the purchase of arms and ammunition. By the time peace was restored it was estimated that less than 200 individuals remained alive.

Thanks to intervention by the Mozambican Government and the GRP, today (end 2017) we estimate there to be over 800 elephants in Gorongosa, and their numbers are gradually increasing. Yet, the survivors haven't forgotten their gruesome experiences. They are still wary of people and they continue to avoid large areas of the national park. Read more about the Gorongosa elephants here.

Individuals are the building blocks of a society

We study elephants by observing them and getting to know them as individuals. Each elephant in a population is important, and we identify and register elephants, one by one, documenting each with photographs, their physical characteristics, and life history information. With each field trip we accumulate more knowledge of individuals and their families and get closer to an accurate estimate of the size and structure of the Gorongosa population. 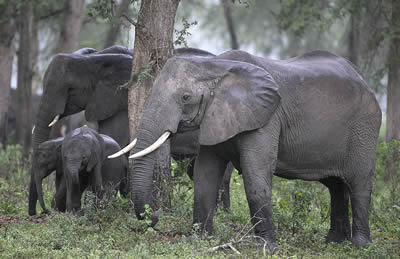 For example, what proportion of the population is male, female, young and old? How many families are there? How many clans? Where do these different clans live and what habitats do they depend upon? The Gorongosa elephants are known for their aggression. Are all elephants equally aggressive? Are they calming down with time and exposure to friendly people?

Since this population has come through a period of heavy poaching, a large portion of the population is tuskless. How many tuskless elephants are there? What are their ages and what does the demographic signature of tusklessness across families reflect about their past and mean for their future?

With this knowledge we can document a range of characteristics about the population that help us to determine how poaching impacted this society, to understand some of the implications of these for its recovery, and to offer our insights to the Gorongosa Restoration team.

Watch the short film embedded at the bottom of The Gorongosa Elephants page to learn more about how ivory poaching influences tusklessness in elephant populations.

Gorongosa Elephants Who's Who & Whereabouts 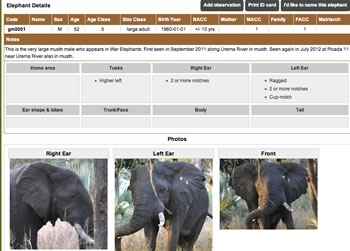 To help with this work we designed and built the online Gorongosa Elephant Who's Who & Whereabouts Database to house our data.
The Database includes a searchable registry of individually known elephants in the “Who’s Who” while geospatial records of the data we collect is held in the Whereabouts. The latter includes information on our sightings of elephant groups, sick and wounded individuals, signs of elephants and elephant mortalities.

We also developed a multi-language (English, Portuguese) Gorongosa EleApp for the collection of elephant observations via smart-phone. Observations of individuals and families are uploaded from the EleApp to the Gorongosa Whereabouts Database so that we can easily compile our data and view the patterns that define this population, and share our insights with park management to better protect them.

Documentation through images and video 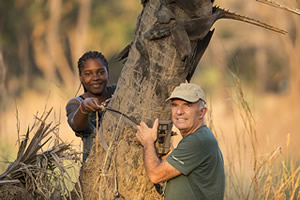 We use still and video cameras to document individual elephants and their behavior. Images taken of each group are the basis for individual identification and the population of the Gorongosa elephant databases. Both photographic still images and video are also mined for specific behavior as part of our long-term study of the behavioral repertoire of African elephants. The result of this work will be included in ElephantVoices' online Elephant Calls and Elephant Gestures Databases.

Furthermore, we are also using strategically placed motion triggered cameras to collect data on elephants who use habitat that is difficult for us to access due to the thickness of the forest and lack of road network. These data have permitted us to document many individuals whom we would, otherwise, not have known existed. Such cameras are particularly useful where we require information 24/7 and where elephants are crossing the park boundaries.

Building local capacity is an essential component for long-term conservation success, and is a core goal of ElephantVoices. In Gorongosa we are training Mozambican, Dominique Gonçalves, who during 2016/17 completed her Masters degree at DICE, University of Kent. We regularly go to the field with Mozambican biology and veterinary interns to introduce them to elephants and our work.

Interacting and collaborating with the different departments and personell involved in Gorongosa National Park is an integral component of our effort to monitor and protect the Gorongosa elephants. Particularly important are the Departments of Conservation, Science and Human Development. Due to the threats posed to elephants by people, as well as those posed to people by elephants, the intersection between anti-poaching, the veterinary team and human-elephant conflict mitigation is both delicate and crucial. Sharing of information and data is the basis for synergystic and effective conservation.

In the 6-part, award-winning documentary series "Gorongosa Park: Rebirth of Paradise" that premiered between September 22 and October 6 2015, you can learn more about Gorongosa National Park and the ongoing holistic restoration of it. In Episode 2 (Elephant Whisperer) and Episode 5 (Battle Lines) you get glimpses of the early work of ElephantVoices in Gorongosa. You can watch the entire series via PBS LearningMedia. The series was aired on PBS and National Geographic Wild.


Dominique Gonçalves speaking at National Geographic Society on Half Earth Day, 23 October 2017. It was an amazing speech - you will enjoy watching it. Video embedded from Gorongosa National Park on Vimeo.