Elephants are among the most intelligent, socially intricate and emotionally complex non-human species - or so holds conventional wisdom. This generally held conviction is based on legend as well as on decades of scientific research.

For almost two thousand years biologists and philosophers going back to Aristotle have viewed elephants as highly intelligent and some have even seen them as quasi-moral agents. The literature is full of accounts describing the apparent intelligence of elephants. 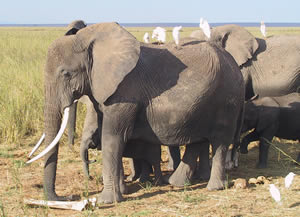 For example, one often related tale is that of Chadrasekhan, the elephant who would not lower a pillar of wood into a hole containing a sleeping dog until the dog was chased away. Another account is that of an elephant who placed vegetation under his feet to prevent himself from sinking into muddy ground where he was tied and could not reach dry ground. Yet another legend tells of captive elephants who stuffed their bells with vegetation so that they wouldn't ring when they entered the farmers' fields at night.

Rench, a scientist who studied elephant intelligence remarked on the surprising ability of captive elephants to work with minimal instruction as well as their talent to function as a team. Their extraordinary balance and synchronization, pushing and dragging heavy logs onto a truck, for example, caused him to credit elephants with the ability to anticipate what will come of certain actions.

Many of the accounts of elephants' cognitive abilities appear to be so astonishing that it is surprising that until very recently there has been so little scientific follow up. Just how clever are elephants?

As a general rule it seems that those species with absolutely large brains show greater development of the cerebral cortex, have greater capability for learning and seem to be able to learn more complicated tasks. It also seems that larger animals with large brains also have better memory - in other words the ability to retain information for longer.

Elephants are exceptionally large and long-lived and they have remarkable memories. They accumulate and retain social and ecological knowledge, and they remember the scents and voices of other individuals migratory routes, special places and learned skills for decades. Rench retested a female on some of the visual discrimination pairs that she had learned after a one-year delay, and she was able to achieve an accuracy rate of 73-100%.

Randall Moore recounts an extraordinary tale that demonstrates the long-term memory of elephants. He returned two American zoo elephants to Africa and released them in Pilanesberg National Park, South Africa. Many years later one of the females, Owala, was bitten by a hippo and the wound required regular treatment by a veterinarian. Rather than repeatedly immobilizing her park officials invited Randall to try to use vocal commands to call her over so that they could treat her without anesthesia. After 12 years of separation Randall called her by name; she immediately walked up to him raised her trunk and allowed the vets to treat her wound. 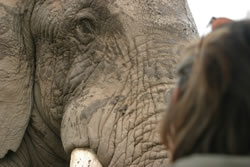 ElephantVoices' Joyce Poole has her own account of an elephant's memory. In the mid 1980s, she established a special relationship with a young male named Vladimir. When she parked her car nearby and called to him he would come to the her window allowing her to touch his trunk and tusks. They interacted, thus, perhaps 8-10 times over the course of about five years. Due to a variety of circumstances, after 1991 Joyce did not see Vladimir for 12 years. When she met him again with Petter in May, 2003 he was a 34-year-old-male and, with his grown-up appearance and new tears in his ears, she hardly recognized him. But there was something about the way he moved that told Joyce that this was her old friend. They drove nearby, stopped the car (a car that was new to him) and Joyce called his name. Vladimir left his path and came deliberately over to the car and walked by, almost rubbing his side on the car. Joyce circled again, parked and called his name. This time he walked up to Joyce's window and allowed her to touch his trunk and tusks just as she had done 12 years before.

Remembering their own kind

Results from work by late Bets Rasmussen, too, demonstrate the unusual memory of elephants. Rasmussen found that elephant offspring respond more strongly to their mother's urine than to urine from other related or unrelated individuals. And that response was found even after the offspring had been separated from their mothers for up to 27 years.

Female elephants meet and recognize a large number of other individuals on a daily basis, presumably keeping a mental record of their relative ages, status, sexual condition, personality and changing location. The social complexity of elephants stems in part from this ability which promotes the development of multiple and many-layered social relationships.

Playback experiments in Amboseli provide good evidence for the large social network and exceptional social memory of elephants. Companions use contact calls to stay in contact when they are visually separated, and Karen McComb and colleagues found that female elephants are able to remember and distinguish the contact calls of close female female associates (family and bond group) from those females outside of their extended family network. Moreover, they found that females can distinguish between the calls of females from family units farther removed depending upon how frequently they encountered them. Results of this body of work suggest that females remember the contact calls from around 14 families in the population (~ 100 adult females).

Lucy Bates and her colleagues found that elephants are able to use their keen sense of smell to recognize individuals as well as being able to keep track of their changing locations.

A large musth bull may encounter scores of females each day. Males move easily through an aggregation containing upward of a hundred females, testing each one in turn, seemingly without testing the same female twice. They appear also to be able to keep track of which among them is close to coming into estrus. Furthermore, to avoid fatal interactions musth males need to remember the size and strength of potential rivals and to factor in their fighting ability based on their current body condition and musth state.

In Amboseli, Hamisi Mutinda found that families led by younger matriarchs sought the company of families led by older matriarchs. Families with older individuals possess extensive knowledge about resources, such as the location of ephemeral watering areas or regions with seasonally available food as well as knowing how to make appropriate adjustments to these routes in the event of new human settlements. Old matriarchs, therefore, serve as a repository of ecological knowledge for other elephants. Such knowledge may be invaluable during stressful periods where keeping company with older leaders may lessen the effects of environmental variation and reduce mortality.

One classic example of the importance of ecological memory can be seen among the desert elephants of Namibia and Mali. These elephants have enormous home ranges (up to 11,000 km2), which reflect the sparse distribution of water sources. The survival of the desert elephants depends on their knowledge of these drinking sites, some of which may be visited less than once a year. During a 1981 drought in the Namibia, more than 85% of the herbivores in the elephants' home range died from starvation, due to the lack of available food around the remaining water holes. Radio-collared elephants expanded their treks to include water holes far away from their food resources and lost none of their members. 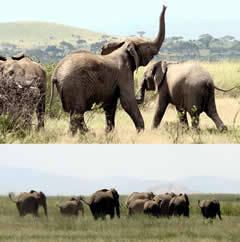 Lucy Bates and her colleagues working in Amboseli found that elephants are able to use olfactory and color cues to classify humans into groups based on the differing levels of threat each posed. Elephants responded with greater fear to the scent of clothing previously worn by men from the Maasai ethnic group, who demonstrate their virility by spearing elephants, than to similar clothing worn by men of the Kamba tribe, who represent little threat.

Work carried out in Amboseli by McComb and her colleagues have shown that families with older matriarchs are more proficient at distinguishing between the voices of familiar and unfamiliar females. Families with older matriarchs have higher reproductive success than families with younger matriarchs, and the ecological and social knowledge gained with increasing age may be the reason. The possession of learned experiences by the oldest individual in a group of advanced social mammals can influence the social knowledge of the group as a whole. 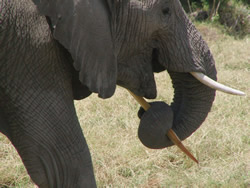 Elephants use and even manufacture simple tools. Their prehensile trunk with its finger-like tip is capable of manipulative movements similar to those performed by primates with their fingers and thumb. The sensorimotor specializations of the trunk are extensive, allowing the delicate manipulations of both large and small objects.

Elephants pick up objects (logs, rocks) and throw them at their opponents, they use logs to neutralize electric fences, leafy branches as fly switches, and short, sturdy sticks to de-tick themselves, to name a few.

Empathy is the ability to share another's feelings or experiences by imagining what it would be like in their situation, and is often referred to as "putting oneself in another's shoes." A cornerstone of normal human social function is the ability to detect and respond appropriately to the emotions of others, and the ability to empathize has long been considered a key component of what makes us different from other species.

Yet, elephants exhibit many behaviors that appear to be empathetic and scientists argue that they have all the attributes that would favour the evolution of empathy. Like humans, elephants are large-brained, slow growing, long-lived mammals. Female elephants remain closely bonded to their close relatives for life and caring for another relative's offspring is common and important for the survival of calves. Moreover, elephants possess complex visual/tactile, acoustic, and olfactory communication systems.

Empathetic behaviors are commonly observed among elephants including: the formation of coalitions to assist others in need of help; offering protection to young or injured elephants (or even other species); providing comfort to distressed individuals; babysitting calves who are separated from their mothers; retrieving calves who are separated from their natal family; assisting individuals who have fallen, require physical assistance or are immobilized; removing foreign objects from an elephant. Elephants have even been observed to feed another who was incapable of feeding itself.

A discussion of elephant intelligence would be incomplete without mention of the well-known reaction of elephants to the death of a member of their own species. Elephants exhibit a variety of responses to dying or dead elephants and to elephants bones or tusks including touching with the trunk and feet,

attempted lifting and carrying of the body or bones, feeding, body guarding, covering and burying (find descriptions and examples on The Elephant Ethogram.)

What does their marked reaction mean? Could it be that elephants have some understanding of death? We think that they do. An article about this in NewScientist.com 26. Oct. 2005 is worth reading - you can access the paper abstract and, potentially, the full paper, initially published in Biol. Lett., here.