With a large body comes a large, complex brain. Despite being the largest living terrestrial mammal, very little is known about the elephant brain. Indeed, until recently, only a few original articles had specifically focused on the elephant central nervous system (Cozzi et al. 2001). The brains of Asian and African elephants rank among the highest for absolute and relative mass, cortical expansion. Their brains exhibit features comparable to those of some of the Cetaceans and the Great Apes, including humans. Averaging about 5 kilograms, the adult African elephant brain is the largest among living and extinct terrestrial mammals. The brain of a newly born elephant is approximately 50% its adult weight, indicating a prolonged developmental period for the brain wherein the environment will significantly shape neuronal microstructure. 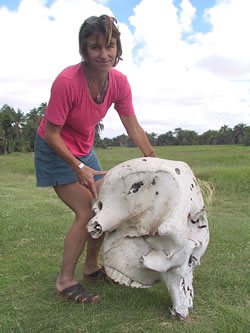 One way of comparing the brains of different animals is to use the Encephalization Quotient (EQ). EQ is the ratio of the observed brain mass to the expected brain mass of a typical animal of that size (Jerison, 1973). Looking at brain size in this way, an EQ equal to 1.0 is an average mammalian brain. Theoretically, the larger the brain is relative to body size, the more the neural resources there are to go beyond basic survival tasks (e.g., breathing, motor skills) into more complex cognitive functions.

During the course of evolution, the EQ of the Proboscidea has increased by 10 fold, from 0.2 for extinct Moeritherium, to about 2.0 for extant elephants (Shoshani et al. 2006). The EQ for the 16 elephants whose brains have been measured (as of 2006) range from 1.13 to 2.36, with an average of 1.88. Asian elephants appear to have a higher average EQ than African elephants, at 2.14 and 1.67, respectively - although these figures are based on a very small sample size. In species where sexual dimorphism is pronounced, as in elephants, males have lower EQ values than females (EQ Loxodonta africana: male: ~1.3 - female: 2.0). So it is clearly important to know which sex is being measured as this may also affect observed differences between the two species.

The figures for elephants are comparable to the larger primates (e.g., chimpanzee: 2.2-2.4; gorilla: 1.4-1.7; orangutan: 1.6-1.9, although Homo sapiens at 7.0+ is far above all other mammals). The EQ for Cetaceans range from about 1.5 in river dolphins to as high as 5.6 in bottle-nosed dolphins, which is about the same as Australopithecines. Gross relative brain size provides only a small window into intelligence, which is too complex to be characterized by a single numerical index. The internal structural complexity of individual parts of the rain is probably a more important factor in the evolution of intelligence.

Elephants have the greatest volume of cerebral cortex available for cognitive processing of all land mammals. Elephants have a large and highly convoluted neocortex, which is the outermost ribbon of grey matter one sees when looking at the cerebral hemispheres. The neocortex is the seat of enhanced cognitive skills, such as working memory, planning, spatial orientation, speech and language. The volume of elephant neocortex relative to the rest of the brain ("neocortex ratio") has been shown to correlate closely with social group size, suggesting that it underwrites the cognitive skills needed for complex social living.

Moreover, the finding that neocortical ratio predicts the frequency with which primate species have been found to use tactical deception to solve social problems lends support to this argument. We know that elephants have a very large and convoluted neocortex, further supporting the notion that elephants are processing very elaborated sensory information, as one would expect in higher cognitive processing. It should be noted, however, that elephant cortex appears to have a relatively low density of neurons. This has led some researchers to suggest that the elephants' cognitive faculties may be concentrated in long-term processing and in synthesizing a great diversity of input over time (Hart et al. 2008).

Two other brain structures in the elephant have begun to be investigated: the corpus callosum, the main fiber tract that connects the two hemispheres, and the cerebellum, which is intimately involved in coordination. Manger et al. (2010) have examined the cross-sectional area of the elephant corpus callosum. Although it has the largest absolute size recorded to date, the relative size compared to the rest of the brain is what one would expect. Additionally, the preliminary data suggest a possible sexual dimorphism (females > males) in the size of the corpus callosum, which would suggest that elephants are the first non-primate to exhibit this sexual dimorphism. Finally, elephants exhibit a relatively large cerebellum. This is presumably associated with fine motor control of the trunk. Ongoing research is now exploring the neuromorphology of nerve cells in the cerebullum. As in the cerebral cortex, these appear to be quite large and complex.

How intelligent are elephants?

Clearly, much more research is needed before we understand the significance of these cellular characteristics in elephants. But the research appears to be well underway, and those who have had the privilege of examining the elephant brain agree that it is a magnificent collection of very intricately connected neurons. Certainly, the complexity of the elephant brain provides support for elephant intelligence. Read more under Elephants are intelligent.

Bob Jacobs talking about the amazing brains of elephants on documentary Mind of a Giant from 2016.