Seismic energy transmits most efficiently between 10-40 Hz - in the same range as the fundamental frequency and 2nd harmonic of an elephant rumble. It turns out that when an elephant rumbles a replica of the airborne sound is also transmitted through the ground. Elephant sounds have been measured as traveling at about 309 meters per second through air and at about 248-264 meters per second through the ground. 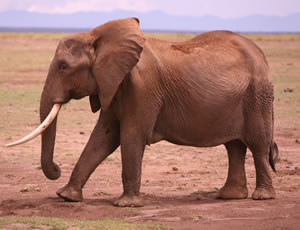 Experiments carried out by Caitlin O'Connell and colleagues have shown that elephants are able to pick up these seismic signals, to orient in the direction that the vibrations come from and even to respond to them appropriately.

Elephants may be able to detect these seismic vibrations, or rayleigh waves, through two possible means: bone conduction and the use of massive ossicles of their middle ears or, possibly, by mechano-receptors in the toes, feet or trunk that are sensitive to vibrations.

You can find an interesting article about seismic signals among elephants here, and numerous others through a Google search on “Seismic signals from elephants”. You will enjoy watching Dr. Caitlin E. O'Connell talk about this exciting topic on TEDx Talks in 2013, and an episode of Deep Look (KQED San Francisco, presented by PBS) called "How Elephants Listen... With Their Feet", from July 2018. Both films are embedded below.