The use of the bullhook physically harms elephants

The bullhook is a tool used by mahouts, and many elephant handlers in zoos, circuses and temples, in the management and disciplining of elephants. The elephant goad or ankus (from Sanskrit aṅkuśa or ankusha), is traditionally used on sensitive areas of the body. For example, a bullhook may be used behind the ears where the skin is paper thin, around the eyes where the skin is also very thin, and on the feet, trunk and around the mouth which are highly enervated. These areas are all extremely sensitive to the touch of the sharp metal stick, or hook, at the end of a bullhook. The hook is most often made of steel, or bronze.

The use of the bullhook psychologically and emotionally harms elephants 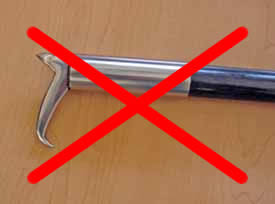 People who use bullhooks often claim that these instruments are only a “guide”. In the wild dominance between elephants is based on age-dependent body size thus older, larger animals rank above smaller younger animals. The only way a human being (approx. 1/60 the weight of an elephant) can rank above an adult elephant is either through fear, learned helplessness, or in rare cases through respect based on companionship and trust. By maintaining a fear of the consequences, bullhooks and other “guides” ensure that an elephant will engage in activities it would rather not engage in (such as stand still in a line; defecate on command; stand on two legs, etc).

Instruments such as bullhooks are successful in “correcting” or “guiding” an elephant only because the animals have learned to be fearful of the consequences of not following instructions. The fearfulness is based on the experience of pain being inflicted. The fear of being jabbed, however lightly, ensures that an elephant obeys commands or follows a guide, if you will. In this process, however, the independent will, choice, autonomy and purpose so important to the life of an elephant are destroyed.

The use of bullhooks constitutes harassment of elephants

In the wild elephants may occasionally be tusked, poked or jabbed by another elephant, but these interactions are relatively infrequent and are carried out in contexts very different from those observed in circuses. In my many years of experience, elephants do not harass or continually pick on another elephant in the manner that can be observed in circuses. In addition, if an elephant is tusked or poked by another elephant she or he receives support from close associates. Elephants in the wild receive physical and vocal solidarity, thus softening any physical and psychological blows received from other elephants. In the circus elephants are not only repetitively prodded and jabbed but have no recourse, no means of escape and no ability to receive support from companions.

The use of bullhooks, whips or other instruments on elephants can constitute handling in a manner that causes emotional stress and trauma

Most circus elephants, and many zoo elephants, exhibit stereotypical behavior - frequent, almost mechanical, repetition of the same posture or behavior. Rhythmical rocking, swaying or bouncing are typical consequences of keeping elephants in captivity. This unnatural behavior is never observed in the wild and is pathological. Animals subjected to prolonged experimentally induced neurosis, or those who have experienced trauma, such as beatings or continual prodding, may show extreme signs of stress and their behavior may become pathologically abnormal including great anxiety and stereotyped behavior.

Elephants are keen social learners. In other words, much of elephant behavior is not instinctive but learned from watching or listening to others. Such learning is seen in many aspects of an elephant’s daily life and is a vital component of learning. Elephants, too, are capable of empathizing with others and have even been observed to wince when a companion reaches its trunk out toward an electric wire.

Consequently, when an elephant is jabbed or poked with a bullhook this action has negative psychological consequences not only for the individual elephant receiving the prod, but also for those around it. The routine use of the bullhook causes psychological harm to the elephants whether they are being hit or not.

The use of bullhooks on elephants is inhumane