When this Elephant Terms Glossary was launched on ElephantVoices in 2004, late M. PHILIP KAHL and late CHARLES SANTIAPILLAI, that compiled it, wrote the below as part of an introduction: 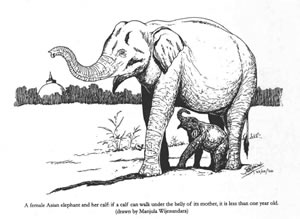 "We hope this elephant terms glossary will be useful to anyone reading about elephants, who encounters an unfamiliar term.

Words have been collected from many sources, over a number of years. Please bear in mind that such a work will always be less-than-complete, very much a work-in-progress. It is an on-going project; many definitions will need modification. We invite you, please, to contribute your comments.

We realize that any such listing will always be a subjective choice and have tried to be "inclusive" rather than "exclusive", reasoning that a term can be skipped over more easily than searched for elsewhere.

We have surveyed many publications that contain glossaries, and selected those items that have special relevance to elephants.

Non-English terms (listed in italics), are found especially in older regional publications. Synonyms are listed under the heading of the most commonly used term.

The close collaboration between Joyce Poole/Petter Granli and Phil Kahl has lead to this online version of the glossary. They have both contributed with comments during the time-consuming compiling process.

We have created the beginning. Now it is up to other elephant-workers to contribute and make it more useful to all.

The glossary can be downloaded to your computer in .zip format (when opened you have a searchable .doc) here: