A young mother Rests-Head on a calf. (Amboseli, Kenya)

Two families walk toward one another on a spit of land between two water holes. Ten elephants come from the right (East) and the MB family comes from the left (West) with at least 26 elephants in their group. A couple of males watch. Soft Rumbling begins before they meet. As the MBs approach with Maria in the lead, Annelies with a newborn, and another female with her, stand Head-Raising and Ear-Lifting, Waiting for them. Both Oriented-Away slightly.

When Maria is about 4 meters from her Annelies Urinates and erupts in loud Open-Mouthed Rumbling and Rapid-Ear-Flapping, As Maria reaches her Trunk-Toward her she Open-Mouth Rumbles again. Maria Ear-Folds and Reaches-Over Annelies and Rests-Head on Annelies' back. Annelies continues to Rumble and gets Temporal-Gland-Secretion. There is more Rumbling by the female who came with Annelies, who Backs-Toward members of the MB family, one of whom appears to Social-Rub against her. Both families continue to the east side of the water holes, where the ABDC families had come from. Annelies and her group join Amparo. Later the two families join again.

Note that while this occurs in an affiliative context it may well be that Maria is showing her dominance over Annelies with the Reach-Over and Rest-Head and Annelies her subservience by Backing-Toward her. (Amboseli, Kenya)

Pascal is in musth and Amparo is in estrus and they are in Consort. This is the 4th day that she is in estrus and she is at her peak. At the start of the clip we see Pascal standing next to Amparo with a Penis-Erection. Pascal then begins a series of courtship behaviors for 2 and a half minutes: Reaching-Over her and Resting-Head on her three times and in between these gently Driving her - pushing and nudging her from side to side and reaching his Trunk-Toward her.

Meanwhile, Amparo cooperates and shows she is ready by Backing-Toward him. She Stands-to-Mate. As the other elephants realise what is about to happen they walk toward her to watch. Tuskless Dram Rumbles and Amparo joins her with an Estrous-Rumble. Dram Rumbles twice more. As Pascal circles Amparo preparing her and himself, Dram walks over to sniff Pascals penis, reaching Trunk-to-Genitals and then Rumbles again.

The tension in the group is palpable and two younger males in the background get into a Duel, Tusk-Clanking. An elephant Trumpets. Another male Runs-After them. Meanwhile Pascal steps back and forth shifting his weight from one foot to the other as he prepares to lift himself onto his hind legs and Dram Rumbles again. Pascal mounts Amparo and the clip ends. (Amboseli, Kenya) 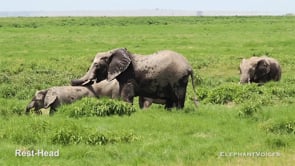 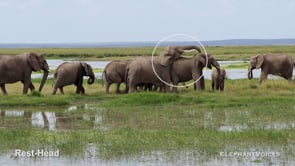 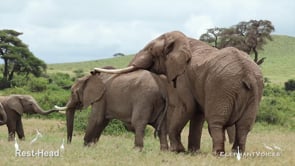