Raising the head during an excited, affiliative interaction such as a Little-Greeting, Greeting, Caressing, Coalition formation. It is typically associated with affiliative vocalizations, including, but not limited to the Little-Greeting-Rumble, Greeting-Rumble, Coo-Rumble, As-Touched-Rumble, Female-Chorus, Mating-Pandemonium, Coalition-Rumbling. This posture is different from Head-High in that the elephant's neck appears to be extended upwards and outwards so that the head appears more separate from the rest of the body. In the Head-High posture the elephant's neck is extended upward but not outward. Head-Raising is observed in all age/sex groups except adult males.

We are with the Mabenzi family. Matriarch, Provocadora, gf0012, stands facing us and gf0020 reaches out Trunk-to-Mouth and gives her a Little-Greeting, Head-Raising and Ear-Lifting. gf0012 takes a couple more steps in our direction and stops and Contemplates us. (Gorongosa, Mozambique)

(Shot with other camera than 1) We are with the Mabenzi family. Matriarch, Provocadora, gf0012, stands facing us and gf0020 reaches out Trunk-to-Mouth and gives her a Little-Greeting, Head-Raising and Ear-Lifting. gf0012 takes a couple more steps in our direction and stops and Contemplates us. (Gorongosa, Mozambique)

Big Mama and her family are Moving-While-Feeding. Her daughter reaches Trunk-to-Mouth in a Little-Greeting to Big Mama, and adopts Head-Raising and Ear-Lifting - we can also see her open her mouth and we hear Rumbling. Then Big Mama Orients-Away as she she does she gives an Ear-Flap-Slide and walks off. (Maasai Mara, Kenya)

As the clip starts we see a 1 year old calf Suckling from a young female from Big Mama's family. A younger female approaches the nursing mother and calf. We can hear the approaching female emit a Little-Greeting-Rumble which is associated with Head-Raising and Ear-Lifting. The calf recognises the caller as she pauses in her Suckling to emit a Snort-Rumble in response as the arriving female touches her Trunk-to Mouth.

The nursing mother also gives a Little-Greeting-Rumble in response and we can see her Head-Raising, Ear-Lifting and Ear-Flapping. The female who arrived touches the infant again Trunk-to-Face and the adults rumble again and then stand side by side. A lovely example of a Little-Greeting. (Maasai Mara, Kenya)

Big Mama's family. A calf looks to be frightened by something and spreads his ears (Ear-Spreading). A young female out of view reaches out to reassure the calf, Trunk-to-Mouth, whereupon the calf appears to vocalize - Head-Raising and Ear-Lifting and then high tails it into the group. There is no audio for this clip. (Maasai Mara, Kenya)

The young females likely give Coo-Rumbles but we cannot hear them due to the wind. The calf's mother is the female in the foreground eating a branch. (Maasai Mara, Kenya)

The young females likely give Coo-Rumbles but we cannot hear them due to the wind. The calf's mother is the female in the foreground eating a branch. (Maasai Mara, Kenya)

After Valente's almost two minute Charge which was joined by the entire family, Valente and Mwana Nzo High-Five and others all gather in an End-Zone-Dance - The main players - Valente and Mwana-Nzo Rumble with Open-Mouth, while they display Rapid-Ear-Flapping, Head-Raising, Tail-Raising, and Defecating. They reach their trunks to one another's mouth, Trunk-to-Mouth, and then display Trunk-Twining, Open-Mouth-to-Open-Mouth Intermittently there are Social-Trumpets. Then Mwana Nzo initiates another Group Advance. Note the circles only briefly mark the Head-Raising by both females. (Gorongosa, Mozambique)

Iphegenia, gf0046, approaches Iria gf0045 who Ear-Folds and Head-Raises in what looks like a Little Greeting, but is more likely to be related to us - a reinforcement of bonds and assurance of support. (Gorongosa, Mozambique) 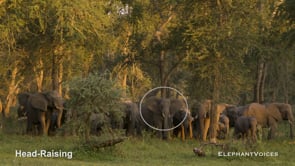 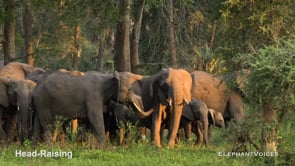 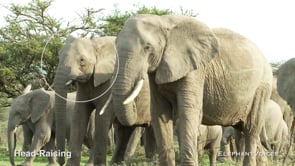 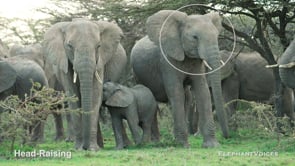 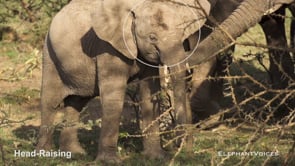 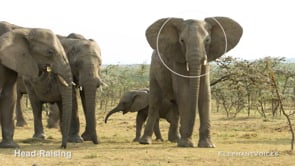 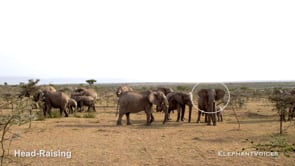 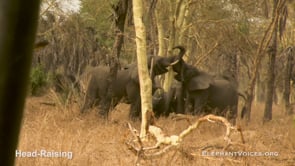 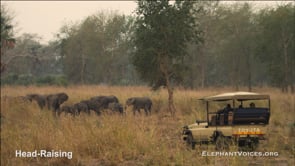