Engaging in behaviors that successfully initiate a group movement or collective action. Movement-Initiation is typically the role of older elephants.

Vigilante, gf0064 (one tusked female), seems to try to Initiate-Movement with a Purposeful-Walk past others - but though some follow her, matriarch, Valda, gf0068 (large tuskless on the right), is not ready. Vigilante and the others stand Waiting. (Gorongosa, Mozambique)

Members of the V family are Waiting to depart southeast, but their matriarch, Valda, has been wanting to go north west. They have been standing Body-Axis-Pointing southeast, while she has been facing northwest. They have turned back and forth in these two directions trying to persuade one another. Eventually the group wanting to go southeast seem to win. Finally one of the younger one turns and all turn. The camera zooms out and Valda has turned Body-Axis-Pointing southeast with the others and I think she initiated this turn. But again Valda stops and waits. There is some Walk-Wait movement by the others until finally Valda moves and all begin walking southeast. All are moving in direction of the river, pausing now and then to grab a mouthful of grass. Decision-making elephant style.

This clip shows this last part of the interaction where the Movement-Initiation is finally successful and they depart southeast. For the full clip view Body-Axis-Pointing. (Gorongosa, Mozambique)

Matriarch, gf0070, sees us and stops. All stop with her. She begins Foot-Lifting. Then she Orient-Away and Touch-Self, stands J-Sniffing and Contemplating what to do. She decides to depart and Initiates-Movement. All follow in a Bunched departure and they make a Full-Retreat. (Gorongosa, Mozambique)

The Mabenzi family and associating males hear a tree being felled about 500 m away. They Periscope-Trunk toward the sound and then matriarch, Valente, Initiates-Movement in the direction of the tree - she adopts a Purposeful-Walk and all follow her in a Procession. (Gorongosa, Mozambique)

Elephants have been mud-splashing and are now resting in the shade of a tree. An adult female abruptly begins Walking and is followed by the five others in her subgroup. She pauses at a tree and they all pause. Then she Walks again and others follow her again. There is no audio. (Maasai Mara, Kenya)

Big Mama's family is Moving-While-Feeding. At the start of the video they are stationary. Then, at the back of the group, matriarch Big Mama begins to Walk initiating a movement in which all begin Walking together. There is no audio. (Maasai Mara, Kenya)

Grumpy Grandma begins Walking, initiating a movement as the rest of the family follow behind her. (Maasai Mara, Kenya)

Matriarch Gina and her family are resting at a mud-wallow. There is some confusion over who the matriarch is as she has recently broken her tusk. It is, however, Gina. The adult female on the right is alert and agitated as a large head of livestock is on the hill behind them and getting closer. We can hear the cow-bells and the men whistling.

This female reaches her Trunk-Toward Gina a couple of times as if trying to get Gina to pay attention and move. Gina continues Resting. At one point one of them Rumbles. Then suddenly Gina begins to Walk initiating a movement that the others follow. (Maasai Mara, Kenya)

Part of the family is browsing, including the matriarch Grumpy Grandma. Others are anxious to move and and are Standing and Waiting. Then adolescent female Latino gives a calf a Push initiating a movement. Latino and calves walk on and eventually the entire family follows them. (Maasai Mara, Kenya)

The Mabenzi family is out in the open feeding when a vehicle approaches and they become concerned. We see several elephants exhibiting Periscope-Trunk. Mwana Nzo, the large tuskless female, Looks-Back and is Foot-Lifting her left hind leg. Matriarch Valente is on the far left. She suddenly begins to move to the right and appears in frame. The entire family follows her lead and disappear behind some trees heading to the right. (Gorongosa, Mozambique)

Matriarch Qoral has Initiated-Movement several times earlier in the day by giving Lets-Go-Rumbles. Her movement away from the swamps and into the woodland was slowed by Qadija being in estrus, and, most recently by a Mating and Mating-Pandemonium. That drama is still unfolding in this clip as the estrus female joins the tight group where the matriarch is.

As the clip starts we hear Qoral rumble a couple of times and while these calls seem to be to her infant, whom she is touching, we see her adjust her position as if preparing to depart. It seems that Qasima, closest to the camera, is aware that Qoral wants to leave as she stands Foot-Lifting. We may have missed a Lets-Go-Rumble prior to this, but there have been so many overlapping calls that it would have been hard to discern. Then Qoral gently Pushes the elephant in front of her and she gives a couple of Lets-Go-Rumbles. Other elephants also call.

Qoral begins to move away and then Waits for the others a bit further off - Walk-Wait. There is a bit of quick movement as Pascal moves through the group following Qadija. The entire family turns and follows Qoral and the males follow Qadija. (Amboseli, Kenya)

The F family has heard our vehicle and are acting Apprehensive and Vigilant. gf0034 is seen with a J-Trunk, Listening, and Head-Swinging, her head raised and turning from side to side. The camera pans left to gf0033 and tuskless gf0035 who is also Listening and steps forward with a Walk-Wait. Then the camera pans back to gf0033 who Ear-Slaps and gives an Ear-Flap-Slide and Initiates-Movement for a Full-Retreat of family further from us.

Note that as gf0033 walks to gf0035 she has an Open-Mouth indicating she is vocalizing, but there is no audio and we are too far away to hear. In another view again she Ear-Slaps initiating further retreat. (Gorongosa, Mozambique)

The I family is Bunching. Isabella, gf0038, is on the left. She shows J-Trunk and Head-Swinging and then Touch-Self x 2. There is apprehension in the group. We then see iJunia gf0005 Initiate-Movement at the back of the group with a mild Ear-Slap and all including gf0038 turn to follow her - it is as if they have been Waiting. (Gorongosa, Mozambique)

As she walks toward the vehicle the filmakers start the car, she pauses, raises her head and continues to advance as she Ear-Slaps audibly. She pauses again and Look-Back and does a J-Trunk toward the others as if to see whether they are with her and she proceeds toward us with them backing her up in a Group-Advance. (Gorongosa, Mozambique) 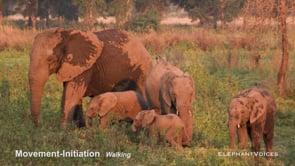 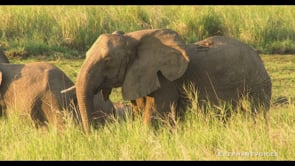 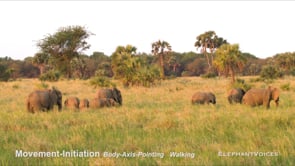 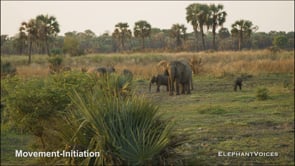 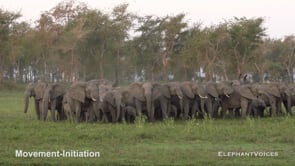 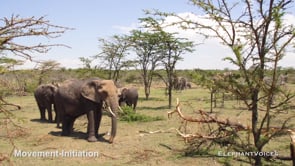 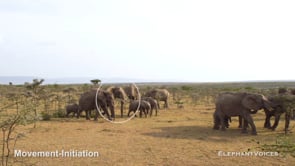 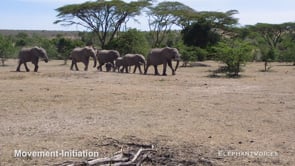 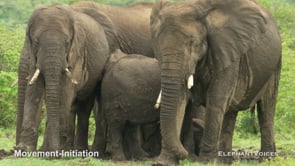 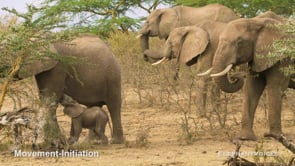 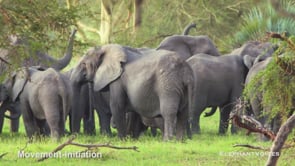 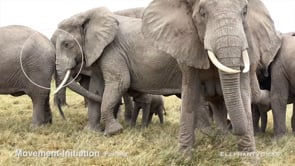 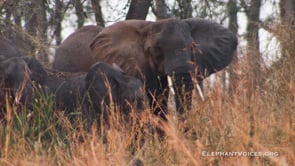 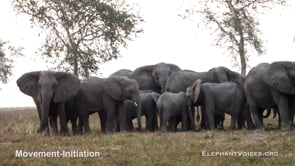 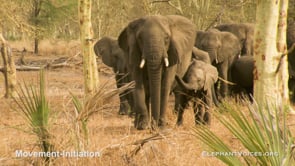