Self-grooming when grooming is inappropriate, or plucking at vegetation, as if foraging, but may not actually ingest any of the material. If the elephant does eat, it does so in a desultory or distracted fashion, may slap vegetation against foot or other part of own body and then drop it. May include throwing dust/grass/etc. onto self. Displacement-Behavior is typically given in conflict situations.

For example during a fight in which an individual shows incompatible tendencies, such as fleeing vs. fighting, young males near an estrous female who want to approach the female but are afraid of provoking aggression by the guarding male, by an elephant Waiting/Queuing-Up for access to a mud wallow or space at a felled tree who wants to Drink/Mud-Splash/Browse but is fearful of higher ranking elephants.

Mabenzi matriarch, Provocadora, gf0012, is aware of us and is Standing-Tall. She seemingly begins to feed on grass, though she doesn't appear to eat - and all the while she is paying attention to us, contemplating her next move. She raises her trunk as if to do a Periscope-Trunk but then appears to use her trunk to rub her ear in an act of Displacement-Grooming. She continues to contemplate us. This behavior occurs just before she initiates a Perpendicular-Walk and a Group-Advance. (Gorongosa, Mozambique)

The Mabenzi family are Bunching together, concerned about our presence. They are acting vigilant - Listening and Head-Swinging. On the left Marcella, gf0017, vigorously grabs trunkfuls of a bush - as if feeding, but not really. This is Displacement-Feeding. (Gorongosa, Mozambique)

In part of the I family, Iphegenia has just Charges a tourist vehicle. She stopped well short and then Back-Toward her family. She and a younger female begin Head-Swinging. The younger female dusts - an example of Displacement-Grooming. (Gorongosa, Mozambique)

Matriarch Provocadora, gf0012, begins a Perpendicular-Walk. You can hear us discussing her behavior, "She seems to be a little bit... sneaky." Through her Perpendicular-Walk we had picked up on the fact that she was already signaling her aggressive intentions to us and others. The filmmaker comments, "She's gonna charge so I might as well go before she does it." She stops her walk and Contemplates us while Dusting - a form of Displacement-Grooming. After the end of this clip she begins her Perpendicular-Walk again. It is Provocadora's behavior that instigates a 5 minute Group-Advance and Charge. (Gorongosa, Mozambique) 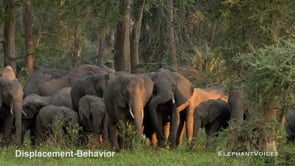 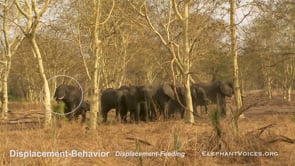 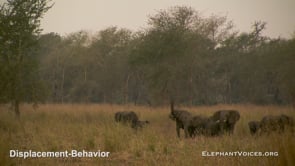 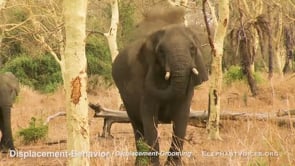 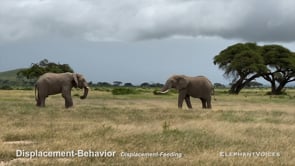