Rushing or ‘Running’ toward another elephant predator or other adversary. Also occurs during play. Charges come in many forms. The elephant typically adopts Ear-Folding, Ear-Spreading and Tail-Raising and the Charge may be preceded by a Perpendicular-Walk. The head may be held either high or low; if low the elephant may exhibit a Bow-Neck. The trunk may be stretched out or coiled under, and the elephant may engage in Trunk-Bouncing or Trunk-Dragging or both. The elephant may Trumpet-Blast or remain silent.

While it is tempting to divide Charges into terms like ‘mock-charge’, ‘real-charge’ or ‘serious-charge’, we have learned, through experience, that this is not particularly helpful. While even the most serious of Charging elephants usually stops before tusking a vehicle, sometimes they don’t. Playful Charges are easy to distinguish as they are associated with a more ‘floppy’ appearance and are typically associated with Pulsated-Play-Trumpets or Mock-Charge-Play-Trumpets. Elsewhere we describe a couple of specific Charges (Group-Charge; Bow-Neck-Charge).

All age/sex groups may engaging in Charging.

Matriarch gf0073 and her family are in the forest as we drive up. This is the first time we have seen this family and they are very agitated, Bunching and Standing-Tall. Earlier gf0073 has done a Perpendicular-Walk and gave us a very serious Charge and then they all retreated to the forest.

As the clip begins we were departing and gf0073 again Charges from the forest at high speed. The video is very shaky but we can see her Trunk-Bounce, Stand-Tall, and then as she begins to Charge again she Trunk-Bounces again with the underside of her trunk. She gives several Trumpet-Blasts. At the end of the video we can see that the rest of the family is joining her. She chased us a good 600 m with the others following behind. (Gorongosa, Mozambique)

Adult female, Ambuscadora, comes like a rocket from the forest in a Charge. She Trumpet-Blasts several times. The first time she stops she puts her hind legs out stiffly behind her and drags them along the ground to slow her speed. She Charges again and Trunk-Bounces. (Gorongosa, Mozambique)

A young male is feeding as hundreds of wildebeest run by making a racket. As predicted he is annoyed by the commotion and Charges them. The filmmakers think at first that he is coming for them and so miss the shot (reason it is out of focus). But apparently he is also acting aggressive and they wonder if he is coming into musth. He looks to be dribbling urine although no temporal gland secretion. (Maasai Mara, Kenya)

A group of elephants is feeding around a lugga when all are surprised by a warthog running past. A pulsating rumble is made by a tuskless female while running. A calf is in the lugga and several female are running to rescue it. There is a lot of rumbling and listening.

As the clip begins, an adolescent male Redirects-Aggression and turns and Charges at the vehicle while Kicking-Dust and giving a Snort for added effect. Then he displays Standing-Tall and Ear-Spreading. Notice that when he Charges he touches himself on his face (Touch-Self) as if slightly Apprehensive. (Maasai Mara, Kenya)

Two males, gm0015 and gm0016 are feeding and Mud-Splashing. gm0016 decides to gives us a harmless Charge, slowing to a walk as he comes closer. gm0015 Stands-Tall behind him. This was filmed in slo-mo. There is no audio. (Gorongosa, Mozambique)

Off camera but on audio Joyce comments that Provocadora, gf0012 adopts a Periscope-Trunk and is Trunk-Twisting and that she is Contemplating what to do. Then Provocadora Charges at us and we drive away. As she Charges she gives a Trumpet-Blast and a Pulsated-Trumpet. When she stops, we stop. She starts to walk and then pauses with Periscope-Trunk and Rumbles. She starts Foot-Swinging - again undecided - Contemplating what to do. She gives an Ear-Flap-Slide and walks a few more steps and Rumbles again. She pauses and Foot-Swings again and then walks behind a bush as she does a Periscope-Trunk x 3 with a sweeping motion - like a Trunk-Sweep and we say she may come again and “take another angle”. On the third Trunk-Sweep she also Foot-Swings again.

The walking behind the bush is a Perpendicular-Walk (purposefully misleading maneuver “feint-right Charge left”). She is walking Perpendicular to us - in other words not toward or away but to the side - as if she is leaving but NOT! Then going behind the bush or trees is an added deceptive tactic. The Trunk-Sweep motion though is a give away. As she charges she runs through a bush - Bush-Bashing making noise and then as she gets closer to us she Kicks-Dust - adding to the visual impact. (Gorongosa, Mozambique)

Iphegenia of the I family adopts her signature exaggerated Standing-Tall posture and then Charges several paces toward a tourist vehicle. She stops and then Backs-Toward her family. She and a younger female begin Head-Swinging. (Gorongosa, Mozambique)

Marcela raises her head in an exaggerated Standing-Tall posture and then, as the camera comes into focus, she Charges lowering her head. She runs about 9 paces and then pulls herself up short. Then she Backs-Away. As she does she Head-Dip-Touch-Ground x 3 - as if sniffing ground where we were. All Bunch. (Gorongosa, Mozambique)

This is a 2 minute Charge by Valente, gf0013, (followed by the others in a Group-Charge) who has taken over from Marcela, gf0017, who took over from Mwana Nzo, gf0016, who led the first Charge after Provocadora initiated the Group-Charge. Note Valente’s Ear-Spreading throughout. She does a lot of Trunk-Bouncing and Trunk-Dragging. At one point she pauses Reaching-High as if her job is complete, but then renews her Charge trying to cut us off as we turn. She clearly understands the arc of our movement and how to best catch us. When she finally figures she has done her job she stops and goes to meet the others who are coming up behind her. It is at this point they have the End-Zone-Dance. For the entire sequence see Coalition. Context: Attacking & Mobbing (1). (Gorongosa, Mozambique)

Corajosa Charges at us, Ear-Folding; she pauses momentarily and then Charges again, purposefully crashing into fallen branches and a log, Bush-Bashing, making a commotion and Kicking-Dust in a visible and audible display. Again she Bush-Bashes as she lunges toward us and Kicks-Dust again. Then she reverses through the branches again making a commotion and begins to Back-Away. She pauses a couple of times and we see her Ear-Fold and Ear-Flap and believe she Rumbles to her family, whom we can see in the distance. She appears to pause slightly facing to them and Listens - as if to see whether they are coming.

In our field notes we note that other females responded with the very low-frequency throbbing rumble we hear when they are attacking/mobbing us. We notice that they respond when she first Charges and then again when she pauses and Rumbles to them they begin to move in her direction. (Gorongosa, Mozambique)

A sub-section of the C family is crossing the track behind us. We have been observing them for a while and they have been very vigilant Listening and Head-Swinging. Nomada crosses first but is rather unsure - she stands looking at us, Chin-Up and Ears-Spread. She Backs-Toward the others who are still on the other side of the track. She Reach-Touch Corajosa, as if to get her attention and, we believe, her assistance.

Corajosa Rapid-Ear-Flaps and Rumbles. Nomada turns to cross the track again with calves in tow and turns to face us with Ears-Spread. Corajosa then comes from the bushes on the left, and Sashays across the road. We hear more deep Rumbling. She Kicks-Dust and Charges with her Head-Low. She gives a Trumpet-Blast and does a Trunk-Bounce with her chopped trunk at then end of her Charge. Someone else also Trumpets and we hear more Rumbling as they disappear into the forest on the other side of the road. (Gorongosa, Mozambique)

We are with a sub-section of the M family lead by Marcela. As we move our vehicle for a better look at them she Charges with Ears-Spread. She Charges right over a bush - Bush-Bashing - for extra effect. She Stands-Tall and then Backs-Toward her family who also move toward her. They stand Bunching and Head-Swinging. (Gorongosa, Mozambique)

We are with a large aggregation of several families - perhaps 60 elephants. The group became alarmed when we arrived as they were caught out in the open. They began moving in a purposeful way almost as if in a Perpendicular-Walk - about 100 m from us. A one-Tusked female gf0151 (circled) was in the lead. She disappeared out of view and then the others stopped Waiting and Listening. Obviously gf0151 must have gone ahead and then turned on us because suddenly she was coming for us from a completely different angle. You can here Joyce swear as she realises she is Charging and we hear gf0151 crash through the vegetation and Trumpet-Blast before the camera is able to turn and catch up with her. She gave another two Trumpet-Blasts Standing-Tall. Then she walked away and then Pirouetted and Backed-Toward the Bunching group. (Gorongosa, Mozambique)

A group of elephants is feeding in a korongo. We hear some crashing through the bushes and an adolescent male in the suddenly Charges in that direction and Tusks the calf who was near him, Ear-Folding. The calf Roars and nearby elephants Run-Away and someone Trumpets. The male then Charge other elephants.

It is hard to understand what caused the commotion. Later the elephants are frightened by something. We would guess he might have been charging something else and then hit the calf by mistake. The calf could have been trying to steal his food, though, which could explain his annoyance. (Maasai Mara, Kenya)

An adolescent male Floppy-Runs at the car. He lowers his head (Bow-Neck) and Curls-Trunk-Under and adopts a floppy-bodied Bow-Neck-Charge position and shakes his head from side to side displaying Head-Waggling. As he charges he Play-Trumpets. One of the filmmakers is concerned that this is a real charge so there is a lot of talking. As he runs he Tail-Raises in excitement and as he stops he Kicks-Dust. As he departs he swings his back legs out as if to kick vegetation, but misses. Then he Floppy-Runs off in another direction. (Maasai Mara, Kenya) 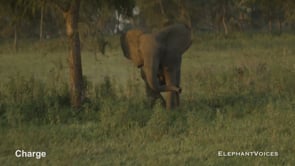 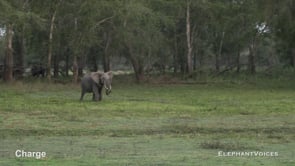 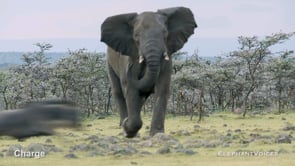 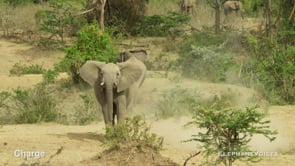 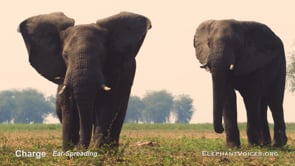 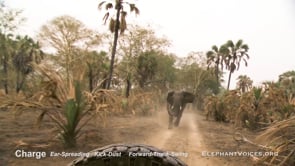 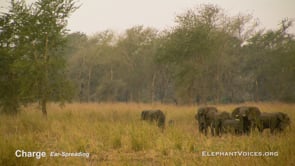 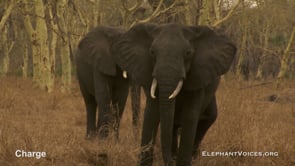 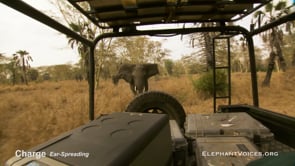 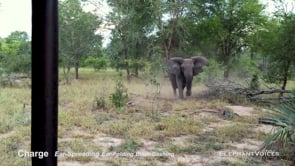 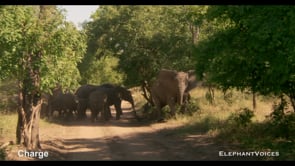 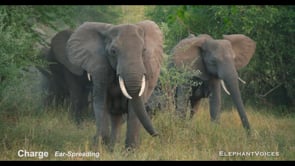 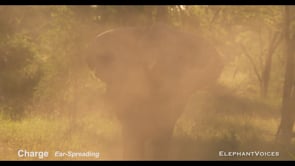 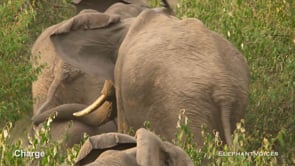 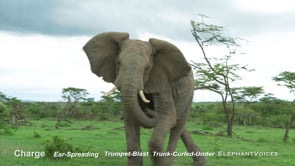