Poking another elephant with the tip of the tusks. This is a ‘less polite’ form of Pushing another elephant. In Aggressive contexts Tusking can be used with the intention to cause bodily harm, as during Dueling, or to show displeasure or encourage another to move. In a Playful context Tusking is more gentle. All age/sex group use Tusking except infants and young calves, who do not have tusks, or, likewise, tuskless individuals.

Three male calves have been having a game of Climb-Upon. When they get up one of the males Tusks the other. (Maasai Mara, Kenya)

Three male calves (between the ages of 18 months to 4 years old) from Big Mama's family are at play. A 2 year old male lies down and permits the other two to Climb-Upon. An 18 month old male calf arrives first and begins to climb on him. The older male walks over, bends down and Tusks the 2 year old calf in his face and then lies down on top of him. (Maasai Mara, Kenya)

Two adolescent males are playing. The one behind is Pushing and Tusking the one in front. The male in front Kicks-Back at the one behind. The male in front Runs-Away while the male behind Run-After. Catching him, the pursuer Tusks him several times and forces him down, whereupon he pins him down by Stepping-On his leg! He Reaches-Over as if to mount the trapped male, but he manages to get up and away. The game begins again. (Gorongosa, Mozambique)

Two adolescent males at play, one Runs-After the other who Runs-Away. The pursuer Grasps-Tail of the other and Tusks him as they run. The fleeing male Tail-Swats him. (Gorongosa, Mozambique)

Young males are Sparring. It has rained in the night and one of them slips and falls as another Tusks him in the rear. We hear the fallen male give a V8-Rumble but the audio is poor. He gets up and they continue to play. (Amboseli, Kenya)

Families of elephants are leaving a pool where they have been Swimming and playing for a long while. As they reach the bank they continue to engage in social play. Some Clamber out to follow their mothers. A juvenile female Tusks another juvenile female and then reaches Trunk-to-Genitals and Grasps-Tail, we believe in an act of Conciliation. (Amboseli, Kenya)

As elephants leave the pool where they have been playing and Bathing, a young female Tusks a couple of juvenile who are ahead of her. This is done in the spirit of play but is vigorous! (Amboseli, Kenya) 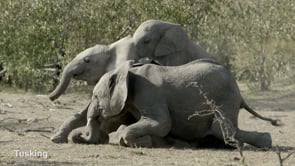 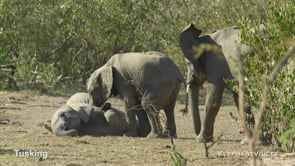 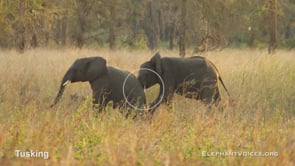 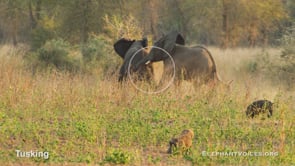 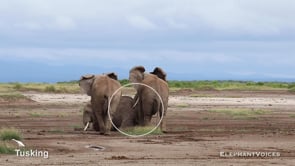 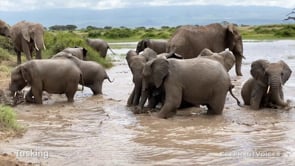 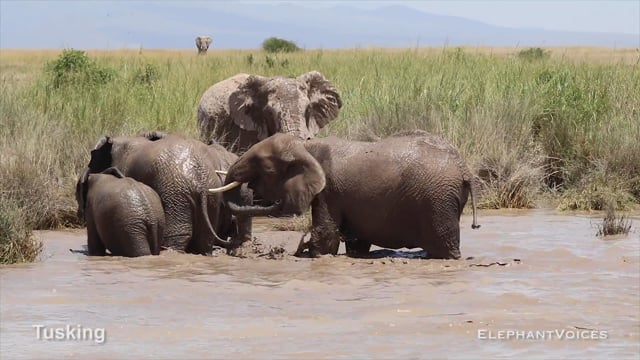