An aggressor lowering the head and bowing the neck downward and simultaneously tilting the head upward so that the tusks are approximately horizontal to the ground. In a sense the aggressor brings head/tusks down to the victim's level. It is one of the more common forms of high-level aggression between females of different families or toward young, pesky non-family males and may be seen as a component of a coalition. It is commonly directed by females at non-elephant threats (including humans). In these contexts the “Bow-Neck” posture may be associated with Ear-Slapping and/or Ear-Folding and is typically accomplished at a fast walk. It may precede or be part of a Bow-Neck-Charge, especially when the receiver is of smaller stature than the aggressor.

The posture is also observed in playful contexts by all age sex groups. It is often a component of Charging in a playful context. It is reminiscent of the “Forward Threat Display" of geese.

A brief Bow-Neck posture in a threat to the filmmakers vehicle. (Maasai Mara, Kenya)

Males and females, adolescents and adults, are playing in the bushes along a lugga. As the clip starts an adolescent female comes up the bank into view. She moves past the car in a Floppy-Run, emitting Pulsated-Play-Trumpets, crashing through the bushes, kicking vegetation with her feet (Bush-Bashing). Her eyes are wide (Eyes-Wide) and she is Tail-Raising. She adopts a floppy Bow-Neck-Charge as she makes a dash past the car and back into the bushes. (Maasai Mara, Kenya) 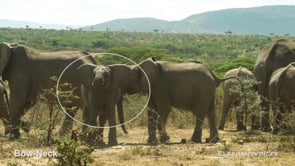 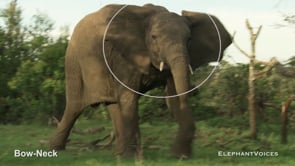