Reaching of the trunk to touch or near touch, or place into the mouth of another. Trunk-to-Mouth is a very common elephant behavior and occurs between elephants of all age/sex groups in a broad range of contexts.

In a Coalition Building context, Trunk-to-Mouth as well as Reciprocal-Trunk-to-Mouth is commonly observed when elephants bunch together to face off a common threat and appears to function in reinforcing bonds and reassuring one another.

In a Calf Reassurance & Protection context, Trunk-to-Mouth is a common component of Caressing behavior displayed by mothers and allomothers toward infants and calves during care, reassurance and protection. Mothers may also use Trunk-to-Mouth to get the attention of infants before moving off or in an attempt to Guide them toward or away from something. In some cases mothers use an exaggerated movement in which they touch the infant’s mouth and then drawing the infants head up and in the correct direction by sliding the along the underside of the infants trunk. A mother may also cover the mouth of a crying infant with her trunk fingers as if to console.

In a Calf Nourishment & Weaning context infants and calves use Trunk-to-Mouth to Solicit-Food from their mothers or others.

The above is a cursory description of one of the most quintessential elephant behaviors and much research is needed to understand the full function of this gentle gesture.

Two groups that have been in the vicinity of one another come together and engage in a Greeting-Ceremony. We see Matriarch gf0070 move forward to Greet them as they approach. We can see Rapid-Ear-Flapping, Ear-Folding, Trunk-to-Mouth and Trunk-to-Genitals. Note the many different individuals of different ages who engage in Trunk-to-Mouth.

This is a Greeting-Ceremony, although based on their behavior we suspect that they are from the same clan but not the same family or close bond-group. (Gorongosa, Mozambique)

The Mabenzi family is feeding. A juvenile male reaches Trunk-to-Mouth to young adult female. She Orients-Away. It is likely that this male is more interested in her food than in affiliative behavior, though it is difficult to attribute motive. (Gorongosa, Mozambique)

A scene from the C family where gf0028 moves toward other members of her family with her 5.5 male calf in tow. She approaches a young male and reaches Trunk-to-Mouth to him - he is likely her age - perhaps 16. Her calf repeats her behavior reaching Trunk-to-Mouth to the same male. (Gorongosa, Mozambique)

The Mabenzi family is walking in a large group. A male calf reaches Trunk-to-Mouth to an adolescent male. (Gorongosa, Mozambique)

The Mabenzi family are feeding in a large group. Adult tuskless female gf0014 reaches Trunk-to-Mouth to gf0022 in what looks like a Little Greeting. There is no audio. (Gorongosa, Mozambique)

The Mabenzi family are in the Faidherbia woodland. Matriarch Provocadora, gf0012, comes from the back to our side of the group. She turns to face us and Maya, gf0020, reaches out Trunk-to-Mouth and gives her a Little-Greeting, Head-Raising and Ear-Lifting. She gives a Little-Greeting-Rumble which can be barely heard. (Gorongosa, Mozambique)

Matriarch gf0070 is walking toward us and is followed by her adolescent male. As he passes a tuskless female (likely a sibling) greets her Trunk-to-Mouth and appears to Social-Rub against her, while she Ear-Brushes him. (Gorongosa, Mozambique)

The Mabenzi family and associating males are feeding on Faidherbia pods. A young adult male approaches gm0006 and puts trunk in his mouth - Trunk-to-Mouth. We believe these two have been feeding near one another for a while. It is possible that this gesture is related to the food they are eating. Later in the clip gm0016 reaches Trunk-to-Mouth to Provocadora's adolescent daughter while they are eating pods. She returns the gesture. (Gorongosa, Mozambique)

A juvenile female approaches a juvenile male and reaches Trunk-to-Mouth as if to steal his mouthful of grass, but doesn't. Instead she appears to be very interested in smelling inside his mouth. She repeats this action three times, once while Ear-Brushing against him in a friendly gesture. (Amboseli, Kenya)

Three calves are walking along to catch up with the main body of the family. Two males on the left and a female, right. The younger male calf reaches his trunk to the mouth of the female (Trunk-to-Mouth) as they amble along. (Maasai Mara, Kenya)

A 1 year old female has moved closer to Pat Derby's 1 year old male and begins feeding on a bush right next to where he is feeding. He pauses in his attempt to dislodge a sapling and Pushes her away. Afterwards she reaches her trunk to his mouth, Trunk-to-Mouth, as if in a Conciliatory gesture. (Maasai Mara, Kenya)

Two males stand side by side, one older than the other. The younger one is exploring the older males mouth and face, gently touching/sniffing Trunk-to-Mouth and Trunk-to-Face. He touches the males tusks and rests his trunk upon it. The older male reciprocates by reaching Trunk-to-Mouth to the younger male. He puts his trunk in the other males mouth twice before touching his own face (Touch-Self). The younger male then resumes his exploration carefully and gently touching the larger male on his forehead, above his eye and in his ear. (Maasai Mara, Kenya)

Two young males stand face to face and reciprocate with Trunk-to-Mouth gestures. The smaller male delicately touches/sniffs the older males face, from tusk to forehead, with the tip of his trunk. The older male reciprocates by reaching to the younger male Trunk-to-Mouth. (Maasai Mara, Kenya)

During a Group-March three young males pause to greet Trunk-to-Mouth Earlier two males had a disagreement, where one tusked the other, but not sure whether these are among the same individuals. (Maasai Mara, Kenya)

The clip starts we see V-Notch Back-Towards Grumpy Grandma, f0412, who is feeding on a bush. It appears that we have missed a bit of behavior and we are guessing that Grumpy Grandma Pushed Vi-Notch away.

The second section the end of a Head-Swipe - V-Notch backed off but immediately tried came back and reached her trunk to her mother (Trunk-to-Mouth) in a Conciliatory gesture. Then after some time Grumpy-Grandma Head-Swings gently at her for a 3rd time but V-Notch is persistent and comes right back in and again reaches her trunk to her mother's mouth in a Trunk-to-Mouth as if in a gesture of Conciliation. (Maasai Mara, Kenya)

Two males walk toward one another; the younger male stops and Waits, J-Trunk, Ear-Spreading and Chin-Out in expectation for the older male, Viajante, to approach. As the larger male arrives and keeps on walking the younger male Backs-Away, reaches Trunk-to-Mouth and then Trunk-to-Genitals. Viajante continues on. (Gorongosa, Mozambique)

Adolescent female Ileana of the I family comes over to the C family and seems to want to see Celina’s new baby. Ileana reaches Trunk-to-Mouth to Celina. Her doing so seems to concern adult female gf0004 of the C family who reaches back over in a slightly hostile manner, perhaps? After touching Celina's mouth, Ileana reaches back to touch her infant Trunk-to-Mouth. And again touches the infant Trunk-to-Face to which the infant reciprocates by reaching her trunk toward Ileana. Ileana seems to Contemplate and then reaches her Trunk-to-Mouth to Celina and then Contemplates again and Touch-Self. (Gorongosa, Mozambique)

A four year old male calf from the C family reaches Trunk-to-Mouth to adult male Rui, gm0008, who is in musth. The calf first sniffs his mouth and then touches his tusk. Toward the end he appears to get a little scared and steps back. (Gorongosa, Mozambique)

Viajante, a male about 25 years old is feeding on grass standing next to a pregnant female who looks about 12 years old, who is also feeding on grass. He starts to move and on the way past her he reaches Trunk-to-Mouth in an apparently friendly gesture and continues walking. (Gorongosa, Mozambique)

The I family is grazing. Inácio reaches up to his mother's mouth as if to Solicit-Food. He does take a stalk from her, but then drops it. It is difficult to determine whether this is Food-Stealing or an affiliate gesture. The latter seems more likely. His age (6 or 7 years) and the ease of grazing would seem to preclude stealing. (Gorongosa, Mozambique)

Jolie in estrus approaches and engages in a reciprocal Trunk-to-Mouth greeting with a young male. She seems to lean into him afterwards although this interaction is disturbed by musth male Conor who approaches. Both Jolie and the young male Walk-Away. (Amboseli, Kenya)

Amparo has just Mated with Pascal. The clip starts with a view of a family member, Qapella, who was out of view when the Mating took place. She arrives now and is tested Trunk-to-Genitals by a medium sized male and gives a Female-Chorus Rumble which is answered by Amparo. Qapella walks toward Amparo and they Greet one another Head-Raising and Amparo touches Qapella Trunk-to-Mouth. (Amboseli, Kenya)

A sub-section of the AAs is feeding on grass Waiting as another part of the family approaches. The approaching adult female reaches out Trunk-to-Mouth to the Waiting adult female who flares one ear toward the approaching female and Ear-Brushes her with it. She pauses and then moves on and all depart together. (Amboseli, Kenya) 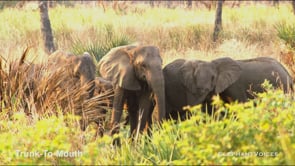 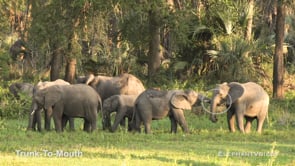 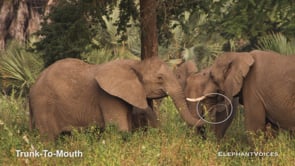 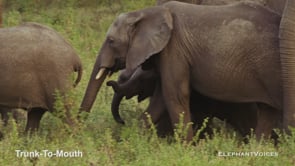 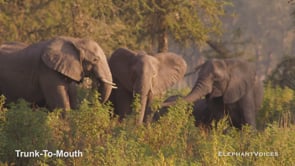 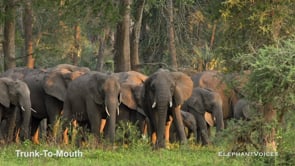 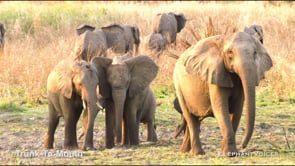 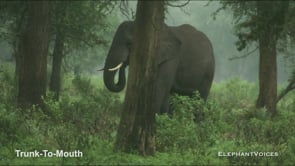 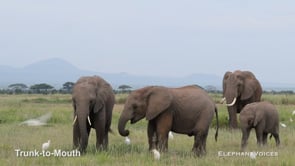 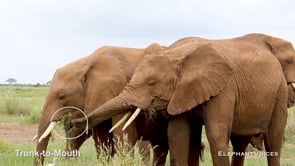 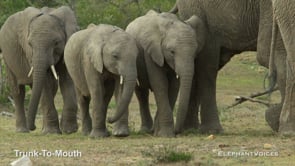 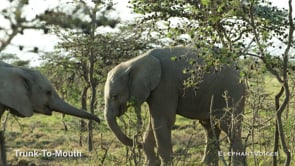 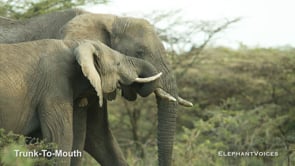 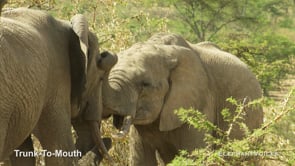 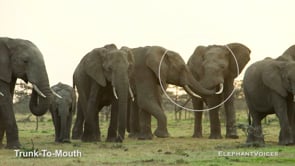 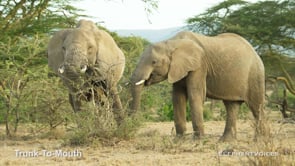 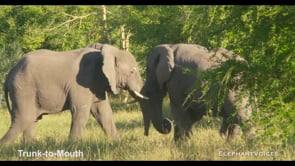 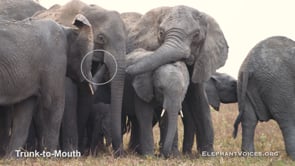 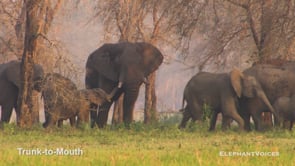 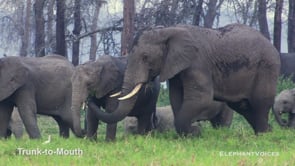 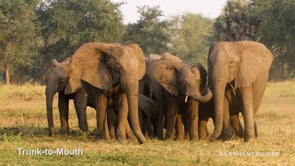 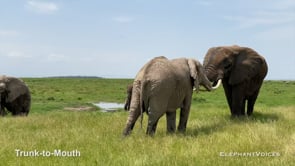 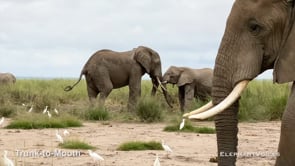 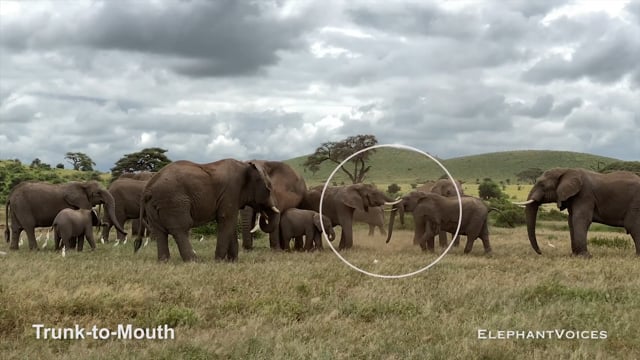 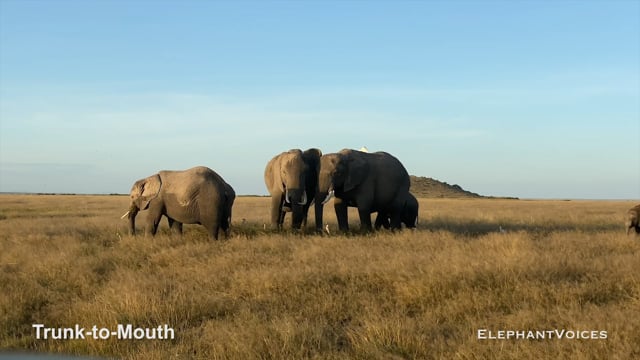