An elephant taking exaggerated sideways steps, to manoeuvre rapidly into a new position that is immediately to the elephant’s left or right. This movement is classically seen by adult males (usually in musth) during Duelling or Escalated-Contests where a male tries to manoeuvre himself into a better position. It may similarly be observed among males during Sparring.

Further, Sashaying may be observed among adult, adolescent and juvenile females as members of a family jockey for a better position during Affiliative behavior such as a Bonding-Ceremony, or by an adult female - or male - during Attacking or Mobbing behavior.

Little E is 8 days old. He is under the feet of his mother and allomothers on the left. Latino has been off somewhere else and suddenly returns. She Sashays in from the bushes Rapid-Ear-Flapping and Greeting-Rumbling as she approaches the others. Lorato and another display Tail-Raising and Lorato Backs-Toward Latino. Lorato and Grumpy Grandma (in the foreground) also display Rapid-Ear-Flapping. The second section is a close-up of the same behavior. (Maasai Mara, Kenya)

Qaskasi has just been seen off by matriarch Qoral and wants to move to the other side of the group next to her mother. The group is very close to our vehicle, so to keep us in view she Sashays across in front of us and then tries to squeeze in behind her mother, perhaps trying to access Qoral's infant from the other side. Her mother Kicks-Back at her. (Amboseli, Kenya)

Two 18 month old male calves at play. As the male on the right stands in an expectant posture, the male on the left Sashays into position to approach and Push him. (Maasai Mara, Kenya)

A sub-section of the C family is crossing the track behind us. We have been observing them for a while and they have been very vigilant Listening and Head-Swinging. Nomada crosses first but is rather unsure - she stands looking at us, Chin-Up and Ears-Spread. She Backs-Toward the others who are still on the other side of the track. She Reach-Touch Corajosa, as if to get her attention and, we believe, her assistance.

Corajosa Rapid-Ear-Flaps and Rumbles. Nomada turns to cross the track again with calves in tow and turns to face us with Ears-Spread. Corajosa then comes from the bushes on the left, and Sashays across the road. We hear more deep Rumbling. She Kicks-Dust and Charges with her Head-Low. She gives a Trumpet-Blast and does a Trunk-Bounce with her chopped trunk at then end of her Charge. Someone else also Trumpets and we hear more Rumbling. (Gorongosa, Mozambique) 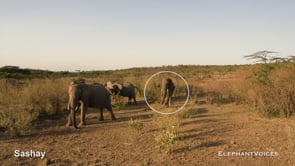 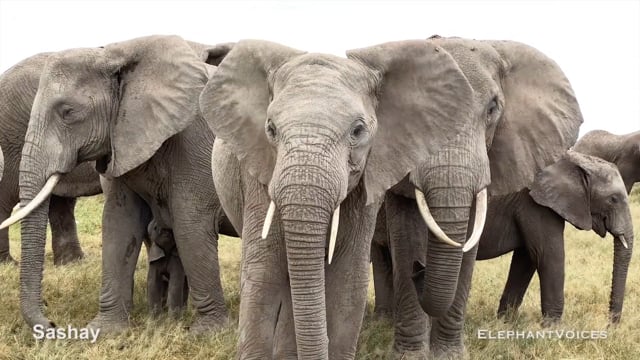 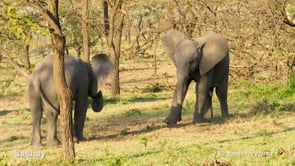 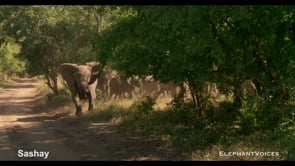