An individual Advancing-Toward or Charging in the direction of an offending object (elephant, other animal, predator, human being) and at the end of the movement appears to ‘stub its toe’ and kicks up a cloud of dust in the direction of its antagonist. The elephant usually Stands-Tall and towers over its adversary. Occurs in all age/sex groups and may occur in a playful context.

Little E is 16 days old. Immediately prior to the start of this clip, his family is trying to get across a rocky river bed. Mama Little E is walking slowly and seems to use her trunk to check the stability of the substrate.

Little E is Tail-Raising in response to a new, frightening situation. Mama Little E slips and falls, landing on Little E. Little E Roars, someone Snorts and others are Rumbling and Tail-Raising. Latino (right) whirls around and Redirects-Aggression, Standing-Tall and Kicks-Dust and Foot-Scuff. She and others Head-Dip-Touch-Ground as they check to see what the problem was - they check out the rocks as if to see what went wrong! Lorato and Mama Little E touch Little E. (Maasai Mara, Kenya) 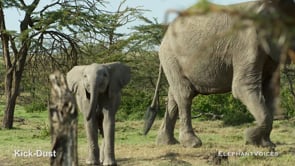 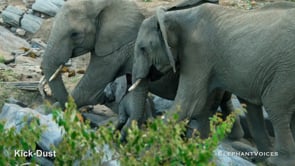