An abrupt shaking of the head, which causes the ears to flap sharply and dust to fly. Head-Shaking usually starts by the elephant twisting the head to one side and then rapidly rotating it from side to side. The ears slap against the side of the face or neck making a loud smacking sound.

Head-Shaking occurs in a broad range of contexts. It can be a sign of an individual's annoyance with or disapproval of an individual or circumstance. It can be used as a threat to other elephants or in confrontations with predators, as well as in play in feign annoyance. It also occurs during intense social events such as Greeting-Ceremonies or the arrival of an awaited individual.

Head-Shaking may also occur after a longish period of contemplation - as if the individual has considered something and the Head-Shake is an outward expression of those feelings. Head-Shaking also typically follows a bout of mud-splashing or mud wallowing.

This behavior is observed in all age/sex groups except during Affiliative bonding behavior in which it is limited to female adults, adolescents, juveniles and calves.

A 4 year old female calf comes up from lugga, looking as if lost (note: I hear Lost-Calls and see her tensed ears and pinched face). A juvenile male sees/hears her and Head-Shakes. He Advance-Toward her (little bully) and tests her (Trunk-to-Genitals) and then lightly Tusks her. He and she go their separate ways. (Maasai Mara, Kenya)

This is an excerpt from an Escalated Contest between two males that lasted close to three hours. At this stage they have already engaged in 3 bouts of Dueling. During this particular clip the aggressor - the male on the right Advances-Toward the male on the left and there is a stand-off, neither one willing to fully take on the other. The broken tusked male is the more aggressive, but the male on the left looks slightly larger and when he takes two steps toward the broken-tusked male, he Backs-Away and Head-Shakes. (Amboseli, Kenya) 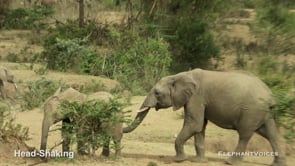 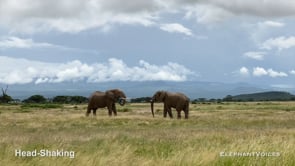