A swinging or tossing of the trunk in the direction of an adversary typically while simultaneously blowing forcefully out through the trunk. Elephants may swing their trunks at other elephants or at smaller animals (e.g. egrets; ground-hornbills; warthogs, people) as a threat, to chase them away, or in play. Forward-Trunk-Swing may be employed by all age sex groups.

A little interaction between two adolescent elephants as a group of elephants engages in play. A tuskless female runs in from the left, while and adolescent male turns to look at the elephant who has chased her. As she begins to move in his direction he turns and Forward-Trunk-Swing at her with the other elephant by his side. She Retreats-From. (Gorongosa, Mozambique)

Three calves are playing in a little mud wallow depression. One Forward-Trunk-Swings twice at an egret, a typical playful activity of calves. (Amboseli, Kenya)

Two young males are facing off in play a deep pool. They look at one another. The one on the right with one tusk is younger and smaller, but on higher ground. He is a bit apprehensive, Chin-Out in anticipation and standing with his trunk curled under, sometimes in or touching his mouth. The male on the left Forward-Trunk-Swings at him repeatedly, occasionally making small Lunging movements. Then he Backs-Away and collapses into the water. (Amboseli, Kenya) 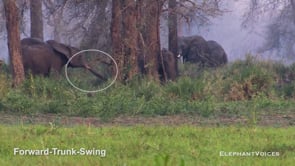 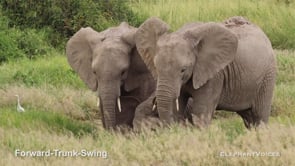 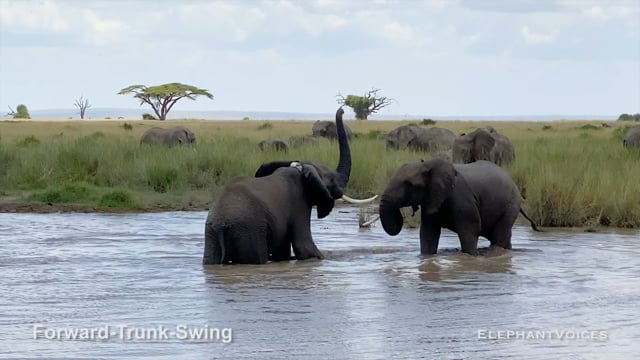